Fencing and the college advantage

Having fencing listed as an interest on your child’s college application could “make the difference between going to a ‘good’ college or university and a ‘great’ college or university.”[1]Fencing gives that extra advantage when applying to higher education.  Of course academia is important, but fencing gives the impression that thestudent is well-rounded on a whole additional level than most sports.

Often referred to as “physical chess,” fencing is one of the few sports that exhibits a combination of physical prowess, mental acuity, and strategic thinking – and colleges eat this up.

For example, Columbia University welcomes fencers with open arms by stating on their website that … “Good colleges are looking for good students who will contribute to their college.  Each year, some straight A students with 1600 SAT’s are rejected by colleges (don’t worry, they get in someplace) because they have little to offer; they simply regurgitate information … they have no creative spirit.  The fencer is unique.  The fencer brings experiences that enrich the college, just as an accomplished poet or violinist do.  This is the type of person the Admissions Directors like to have represented in their stacks of applicants. Being a fencer is a distinct advantage for the college applicant.”[2]

Duke University recently accepted 17 new student athletes for their fencing team.  As head coach, Alex Beguinet, states:  “This has been an especially difficult year for students seeking admission to Duke, and we are very proud to call all of these incoming fencers Blue Devils [team name].”[3] Many don’t know that fencing is an NCAA (National Collegiate Athletic Association) sport.

Fencing has a strong presence in the NCAA — more than 30 top tier colleges in the United States have an NCAA fencing team, as well as 100 other colleges.  Schools compete against each often, so colleges need good fencers to fill their ranks.  This can give the competitive edge your child needs to gain acceptance into a top level university.

Here is a listing   of all the colleges and universities with NCAA-endorsed fencing teams. Beyond giving that critical edge for acceptance into a top tier school, many colleges offer full or partial fencing scholarships including[4] …

It’s not just schools that offer fencing scholarships.  Some clubs and organizations have scholarship programs as well[5] … 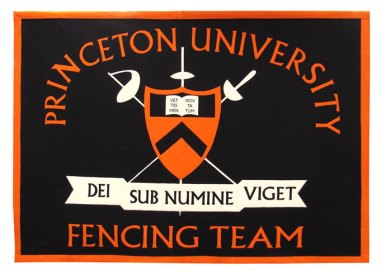 The fencing advantage Fencing is one of the few sports that has longevity throughout college and beyond.  32% of male fencers and 38% female fencers who competed in high school will continue to compete on a college level with a partial or full scholarship.  Compare that to football that only sees about 7.8% of its students continue with the sport in college or the 5.9% (male) and 6.3% (female) in basketball.[6]

Bottom line:  Your child may not be thinking of fencing as they fill out their college applications, but maybe they should — especially if he or she has a passion and dedication to the sport.  Fencing can give your child that extra edge that’s needed to get into a great college. As one Yale student recalls: “The process of athletics recruitment can be daunting, and it can begin as early as sophomore year in high school: in many cases, it involves the preparation of various materials, like recruiting films (videos of you playing your sport), making “official visits,” filling out recruiting questionnaires, etc.” But, she notes, it’s all worth it, because … “Come December 15th, I was lucky enough to be celebrating three different acceptances through three separate early applications (one from my then-first choice school, and two from other early notification programs).”[7]